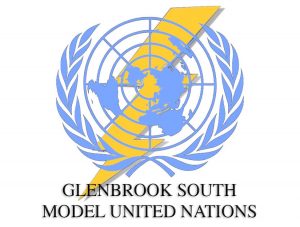 The GBS Model United Nations team was founded 7 years ago by its dedicated advisor, Mr. Terrence Jozwik, a Social Studies instructor at Glenbrook South. In seven years the team grew from 25 members to 125 members. Ms. Nysaa Beckwith of the Social Studies department joined the team as a co-advisor this year.
Currently, the team has over 125 members and a  governing board of 10 students. Our MUN team has attended many challenging conferences and has risen in the national MUN rankings. Model U.N. “Best Delegate” names the GBS team as one of the top 25 teams in the nation. The team has won Best Delegation awards at several challenging conferences. Last year the GBSMUN team placed 1st at the Stanford University conference, the University of Chicago Lab High School conference, and the St. Ignatius High School conference. The GBS team also received an Award of Distinction at the prestigious National High School MUN conference in New York.
This year we will be once again hosting our own conference at GBS – GBSMUN III. Due to its incredibly involved student body and dedicated sponsors, there is no doubt that GBSMUN III will be a great success!
Press f for fullscreen.